Yesterday was Friday… so that means we got our 2nd episode of “WildStar Casual Fridays” (Note.. everyone at Carbine had pants on..clearly, they don’t take casual Friday seriously).

In this week’s LiveStream, CRB_Sunshine (Community Manager) was joined by Caydiem (Senior Game Designer), and we got our Shade’s Eve overview (and Caydiem did way better on her run through of the event, than I did).  They showcased the vendor goodies, the instance, and answered a bunch of questions.  You can replay the stream here (at some point, it’ll be on the WildStar YouTube channel too).

We found out that the cites, essentially get turned into Giant FabKits with tons of plugs, to allow them to be decorated for holidays.  During the stream, they also gave away 2 CBT keys, 30 days of game time, and a Fancy Pants Jacket…  Now, on to the Qs that they A’d:

Q:  How Long will event last?
A:  On PTR till Tuesday.  Live should be a few weeks.

Q:  Hard to get into a career in game design?
A:  These days the best way to do it, is to make games.

Q:  Ingame store only way to get cool mounts/pets seen in store?
A:  Yes, but some may drop in dungeons, etc..

Q:  Factions, race, or path changes for F2P?
A:  No solid answer, being looked into.

Q:  Will Shade’s Silver be deleted at the end of the event?
A:  Not decided yet, might be able to save between years.

Q:  Will we still see event even if transition isn’t completed yet?
A:  Yup.  Shade’s Eve is coming.

Q:  Pumpkin hat?
A:  No, Jack Shade, and Angel’s awesome outfits are available though.

Q:  Any account wide mounts/pets coming soon?
A:  No update

Q:  When will we get Shade’s Eve?
A:  Not giving exact dates, but obviously, some time in October.

Q:  Is WildStar coming to STeam?
A:  No Answer

Q:  Safe to assume candy buckets will be non functional after event?
A:  Think they’ll have floaty icons all the time.

Q:  Will the game remain as funny as it was?
A:  That’s the goal, because that’s WildStar!

Q:  Shade’s Eve have yearly items that are exclusive to that year?
A:  Not decided if anything will be taken out, looking to add more.

Q:  How can Shade’s Eve mount flair be obtained?
A:  Drops from the instance.

Q:  Will Shade’s Eve related decor on the housing vendor remain year round?
A:  Only accessible during Shade’s Eve?

Q:  Will we get better notification that new things have arrived on the housing vendor?
A:  Excellent suggestion, go post it on the housing sub forum.

Q:  Why are boost NPCs not visible to everyone on CBT?
A:  Had to be subscribed by August 3rd to have Signature status, to see the boost NPCs.

Q:  Upcoming years, will Holidays be out in the world too?
A:  Depends on what they can do with the time they have.  There are Shade’s Eve discoveries out there.

Q:  Queue via content finder?
A:  Want to, no guarauntees it’ll make it.

Q:  Is the mount with the horns only for Dominion?
A:  Nope, Dreg racer from the store.

Q:  Is there a comprehensive list of rewards that we can view?
A:  Not yet, but people (fan sites) are putting together a list.

Q:  Pumpkin lantern in capital cities glows nicely, one for housing does not bug?
A:  Maybe..might not be in the light category, submit bug.

Q:  Game looks good, is it alpha/beta, when is full release?
A:  Live game, but F2P transition is in Closed Beta.

Q:  Can we get falling leaf sky for housing?
A:  Will ask, this one may not be avaialble.

Overall, I like the format of these Casual Fridays.. they’re a nice, fairly informal way for us to get some time with a Developer (and, Sunshine doesn’t have to freak that they’re telling us way too much on twitter, since she’s sitting right there to Nerf gun ’em if they say too much).  Because it’s a two person stream, the chemistry between the hosts is much better, and when they banter back and forth it doesn’t feel scripted.

Make sure you jump into beta and test the Shade’s Eve content lots this weekend, it’s going away on Tuesday.

In #WildStar's CBT yet? We've got a frightening focus test coming up… pic.twitter.com/JOStduKeX6

Have finally come to a head… with today’s CBT maintenance.. we get our first real glimpse at the first “holiday” content for WildStar.. Shade’s Eve!

I’m glad to see this hit the PTR for a couple reasons… Carbine has held off on Holiday content since launch, to instead (rightly) focus on fixing things.. so the fact that we’re getting this, means that they think the game is in a good place.  Plus!  If we’re really, really, really, lucky (and, remember..this is just me guessing, nothing official has been said by Carbine)… it means we’ll get Drop 6 before Halloween!

Here’s the rest of the patch notes, in the even you’re interested in something besides Shade’s Eve  😛

The Beta server went down for maintenance this morning, and when it came up.. we all got kicked in the face with a ton of changes/bug fixes (mostly bug fixes).

I’m still patching up, so I haven’t had a chance to test the changes yet.. but, I know what I’m doing later…

The abundant patch notes, also come with a list of known issues (read that here).  There are a lot of changes, so make sure you jump in and help test them (and, to try and make sure nothing else got broke!).

Full patch notes after the break (because it is LOOOOOOOONG!).

END_OF_DOCUMENT_TOKEN_TO_BE_REPLACED

Today we got a deep dive into the updated character creation coming with WildStar’s drop 6.

One of the interesting tidbits from this deep dive, is Carbine has listed what their ‘core improvement’ goals for the revised Character Creation Experience:

I’d say they hit those goals, though, in my opinion, they went to far in the ‘make changes to arkship layout and content’ one.  I talked about this briefly when the PTR first went up here.  Essentially, I feel they cut too much of the lore, and ‘backstory’ out of the new experience.

I do think that the revised experience is much more straightforward, quicker to go through, and very well done though.  The three starting “levels” of the character creation are a brilliant idea, and they’ve got them divided up pretty well.

One “bonus” benefit of the redesign, is that if you skip the Arkship completely, you’re no longer missing out on TALES keys, data cubes, and some journals.

The Deep Dive does touch on some of the content that was moved from the Arkships to the starting zones:

Focusing the arkships on a few aspects of the game meant we had to look beyond just the tutorial zones. There wasn’t space for some of the topics we used to cover in arkships, so we moved some tutorials to the next tier of zones (levels 3-6). You’ll encounter Path content, equipment, and loot for the first time on the surface of Nexus. You’ll see revised, level-appropriate tutorials throughout Wildstar, many sporting new text and images. We’ve also added new quests in level-6 hubs to encourage you to give your class’s support role (tank or healer) and abilities a try.

Make sure you read the whole Deep Dive, and if you haven’t already, sign up for the WildStar F2P Beta here.  Get in there, test, and give your feedback to Carbine.. let them know what you don’t like..but make sure you also tell them what you do like!

Carbine held the first Double XP weekend for WildStar this past weekend… well.. on the PTR anyway.

Because real life hates when I make plans to play WildStar.. I only got a couple hours of playtime in this weekend.  However, I think it was enough to provide some basic feedback (there’s also a youtube video of the stream I did…complete with WAY too quiet mic!).

First.. Love the idea of Double XP weekends.. they make leveling an alt in any game WAY less grindy.. every MMO should have them, regularly (or, take it even further, and go to 12x XP like SWTOR currently is for their subscribers).

Once you’re out of the Daily Login Rewards screen.. there is no UI elements to let you know there is a bonus weekend.

The XP bar needs to be another color, or have a tooltip that explains how much XP you’re currently getting (x% buff from flasks, two-factor authenticator, guild bonus, double XP weekends, etc..).  If I was a new player who was just starting WildStar during a Double XP weekend.. I’d have no idea (based on the current UI), that the quick leveling speed wasn’t normal.

The Event UI, needs to be a bit more specific that path, and crafting XP isn’t included in the Double XP weekend (though, at some point, I’d love to see those items get their own Double XP weekend). 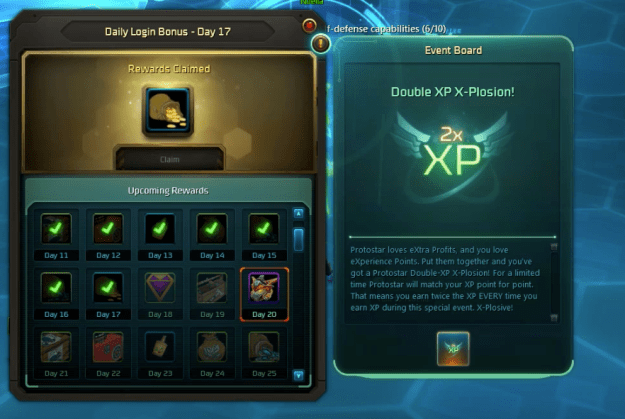 It does a good job telling me that the event is on.. it just needs a little bit more detail.

Fast leveling.  I went from Zero to 8, through the novice starting tutorials (shhh! don’t tell.. I tried playing as Dominion!), through the starting zones, and into the first ‘major’ quest Hub Lightreach Mission (The Dominion equivilant to Gallows), all in about 1 hour, and 20 minutes.  For comparison, the last time I went through the full Arkship tutorial, it took me 1 hour, and 40 minutes to get to the equivilent  zone.. and I was two levels lower when I got there.

I stop and read every quest, journal, data cube, etc.. so, if someone was really trying to crank out the levels and skipped reading those items.. they could probably shave even more time off that.

The boosts in the store would allow you to stack that multiplier even further.. I’d imagine you could easily go from 1-50 in a single Double XP weekend…if you were willing to pick up a few flasks too.

Since Path/Crafting XP isn’t doubled – it is easier to outlevel your path/tradeskills (I bet you’re wondering why I’m putting this under ‘good’, aren’t you?)  But, the good news is, since you hit 50 so quickly.. you can cruise back through the low level zones leveling your path/gathering crafting mats.. and help all the low level players with any group quests they might be stuck on!

Overall, this weekend’s Double XP event went off without a hitch (well.. on Carbine’s side..I had that whole ‘low level mic thing’).  With a few tweaks to the UI, it’d be easier to inform people about the event, and what their leveling bonuses are.

I’d like to see Carbine branch out, and do Bonus weekends for Path XP, Reputation gain, Crafting XP, maybe a bonus weekend for the bonus chance to gather rarer materials when mining (and other gathering profs)… maybe even a bonus weekend for OmniBit drop rates.  There are a lot of different things Carbine could provide a bonus too, without completely killing the economy (heck, throw a bonus Glory weekend, and watch those PvP queues POP!).   It’ll be interesting to see what bonus events make it to live.

You probably noticed the PTR going down for a bit this afternoon..If not.. well.. it did, see what happens when you’re at work?

CRB_Sunshine threw up a brief list of the changes that came with today’s patch:

Not a ton of changes, but it’s nice to see the class balance stuff starting to make a decent appearance..